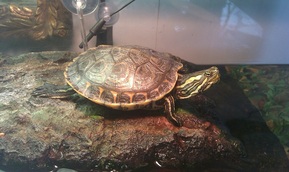 This species is native to Nicaragua and Costa Rica and occurs in Lake Nicaragua, Lake Managua and the lakes and streams that connect the two.  There are other Trachemys species whose native territories overlap that of Trachemys Emolli such as Trachemys Venusta.  With the territories overlapping it is quite possible that there is some cross species mating creating hybrids that contain traits of both species.

T. Emolli has an oval carapace with many circular markings on it and in the center of the circular markings there is a dark spot.  The carapace is weakly keeled with slightly serrated posterior scutes.  Carapace and skin color is olive green to dark brown, with yellowish markings on it.  The supratemporal marking can range from an orange, pinkish or yellowish color and is "pinched off or broken".  This species gets rather large with the males growing around 8-12" and the females growing up to 15" and possibly larger. 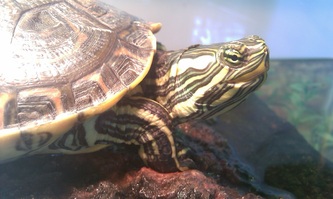 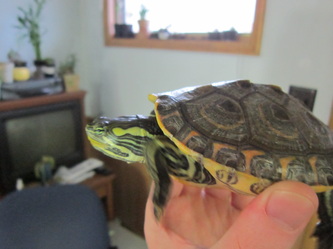 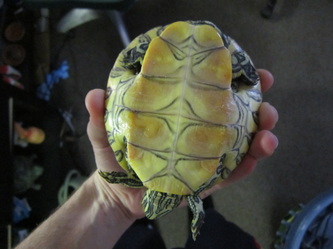 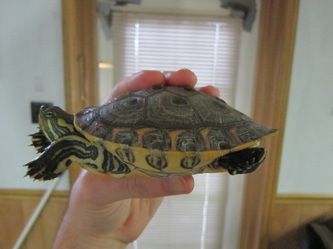 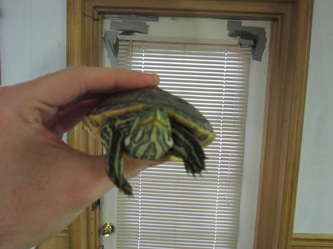 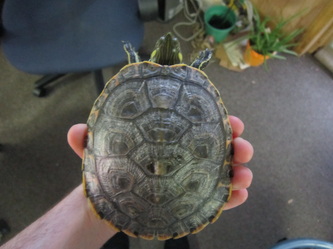 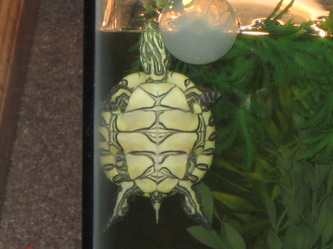 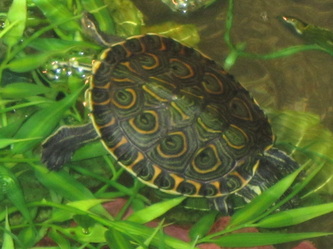 If you have a hatchling you can start out with a small tank or enclosure but you will need to get a big tank in the near future.  If you are seriously considering getting a T. Emolli you should get a large tank, 40 Gal. or more, to begin with.  I recommend this because they will grow extremely fast, they can grown up to 20 cm in two years and can grow to have a total carapace length of up to 15".  In the end you will need something around the 120-150 Gal. range or larger depending on how many are being housed and if they are male or female.  If planning on keeping them outdoors make sure that you live in a very warm area or bring them inside during the cold season, as this is a tropical turtle and cannot hybernate.

As with most aquatic turtles they are more carniverous as hatchlings and turn more herbiverous as they age.  In the wild juvenile turtles eat tadpoles, snails, crayfish, shrimp, fish, insects and insect larvae.  My T. Emolli loves just about any kind of insects if they are living (spiders, meal worms, crickets, different beetles, etc.).  I have found only a few living insects he does not like, such as red wigglers.  As far as greens go they should in theory eat most water plants that other aquatic turtles eat and they should eat most greens, like mustard greens, collard greens, romaine and red leaf lettuce.  My T. Emolli is picky when it comes to the greens and will not eat much of any, with the acception of red leaf lettuce which he destroys.  As for the commercial turtle food they should accept it all however every turtle is a little different, mine prefers ReptoMin over Zoo Med aquatic turtle food.

Mating rituals are the same as other sliders, using foreclaw fluttering in the face of a potential mate.  However I have read that males of this species are not sexually dimorphic and do not grow long foreclaws as other sliders do.  If the female accepts she will drop down and allow the male to mount her.  Their nesting season is from December to May in the dry season.  Females are capable of laying several clutches per a season, with up to thirty-five eggs in a clutch.  The hatchlings will emerge 69-123 days after the eggs have been deposited.

This turtle and its eggs are heavily harvested by locals.  The meat is said to be delicious and the carapaces are painted and sold to tourists.  Farms have been developed to breed Trachemys Emolli to boost wild stocks and to sell in the pet trade.  I read that it was rumored by locals that T.Emolli would come up on land at night time and feed, however this is more than likely not true at all.  I say this because I have never seen my turtle eat out of water, as water is required for most semi-aquatic turtles to be able to swallow.

This care sheet was written using information gathered from the following sources and from my own personal observations.
-  Field Guide to Wildlife of Costa Rica by Carrol L. Henderson.
-  Turtles of the World by Frank Bonin, Bernard Devaux, and Alain Dupre.
-  The Life History and Ecology of the Slider Turtle by J. Whitfield Gibbons
-  http://www.infotortuga.com/trachemys_emolli.htm