We were given this juvenile Painted Turtle by a friend who had found it in a backyard a good distance away from any water.  Upon seeing this turtle for the first time I realized that there were some puncture marks on the top of its shell in three spots.  It looked as if a dog or some other animal had bitten the turtle and did a fair amount of damage as I could see down to what I believe was the actual bone of the shell under the scute.  I only assume that it was bone as it was whitish and hard not soft or anything that would make one think shell rot.  In the short time that I have had this turtle it has already began to grow the scutes back over the bone in the small puncture areas.  We call this turtle Roxane and/or Scottie because we are not sure of the sex of the turtle as it is still a juvenile and not at a proper size to sex the turtle. However I believe in this case the turtle is going to be a girl but we will have to wait a bit and see. 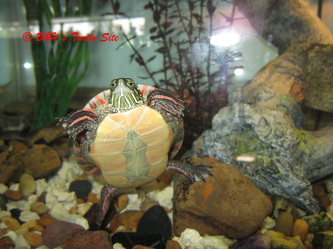 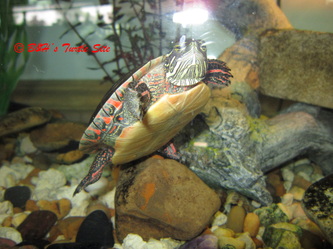